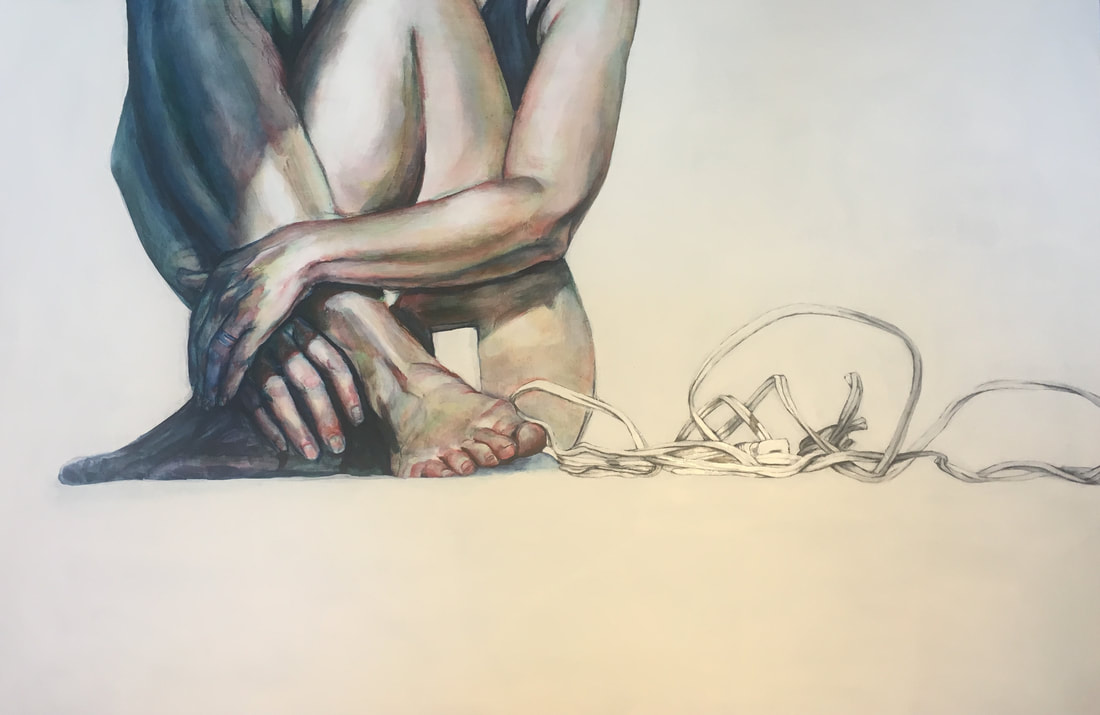 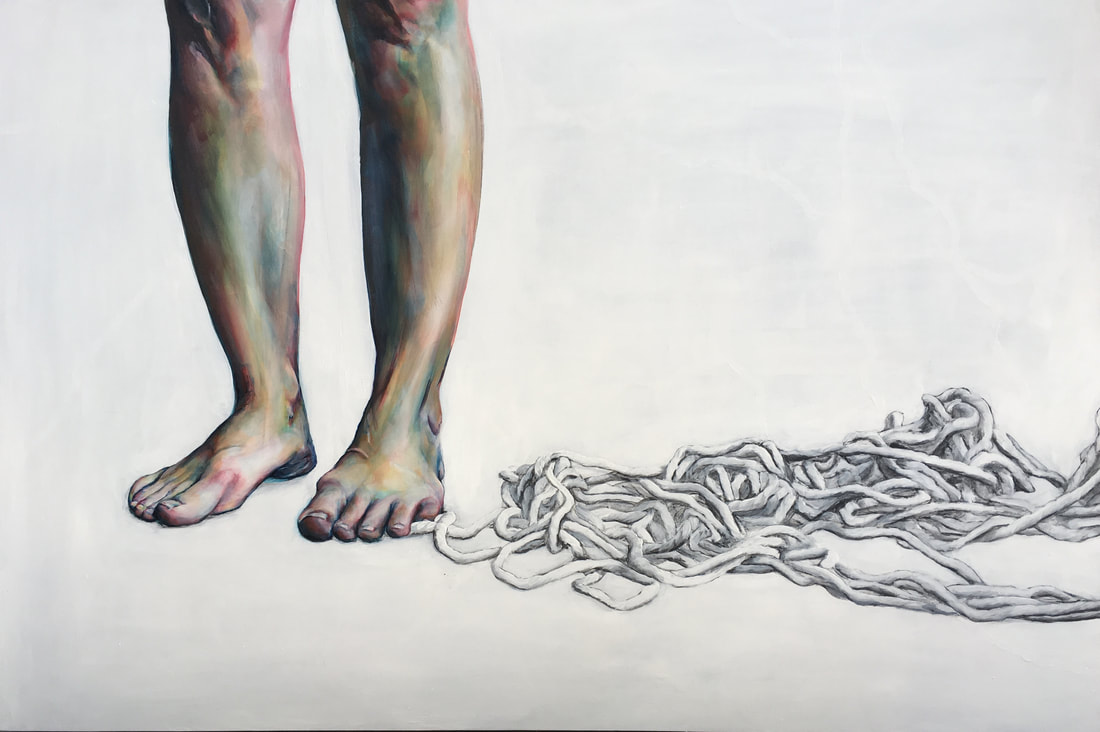 Anne Garvey is a contemporary visual artist based in Oakland, California. Though her artwork spans a variety of media, she is primarily known for her realistic paintings of people and tangled objects. A graduate of the San Francisco Art Institute and Saint Mary’s College, Garvey has exhibited, taught, and collaborated with fellow artists for the past decade. Exhibitions have included Axis Gallery in Sacramento, LA Art Core in Los Angeles, and Root Division in San Francisco. Her painting Hesitation was featured in the publication Memoir Magazine in 2017. In addition, Garvey has participated in residencies as far as the Hoi An Orphanage in Vietnam, and, most recently, the North Street Collective in Willits, California.
Published on April 21st, 2020. Artist responses collected in months previous.

What projects are you working on right now?
Generally speaking, I am developing a body of work about mental states and coping strategies. There are small paintings of tangled objects, and larger pieces that incorporate figures as well. Right now, I am focusing on a series called “Reticulation” that I began at the North Street Collective residency this past summer. It’s loosely about net/web-like formations in the brain that control things like fear and sleep. For that I’m using images of fences and other elements as metaphors for anxiety, etc. and also experimenting with sculptural forms. At the same time, I’m painting a piece for the Perception Project in Los Angeles, a non-profit that pairs artists with people who have experienced major trauma in their lives. We listen to their story, then create work as a response. It culminates in an exhibition and the donation of the piece to the victim. I’m interested in seeing if these kinds of interactions and social practice are something I would like to continue with in the future.

How do you keep yourself accountable in your practice?
First and foremost, I have found that my studio environment, including the people I’m surrounded by, are key to keeping me accountable. I’m fortunate to have found a space that I share with other professional artists that serve as inspiration. Over time, some of us have developed close relationships and formed a crit group. Things are more loose now, but we still check in with each other to discuss goals and share resources. The other thing that has helped me stay on track has been to develop a routine. During the school year (I teach) I have an incredibly tight schedule, so to ensure that I keep the momentum and stick to deadlines, I schedule in studio time five days a week, even if it’s just a two-hour session. Reducing my teaching hours a little has also helped to create more balance in my life overall.

How do you stay motivated to pursue your creative work?
One of the sources of inspiration for my work, ironically, has been my teaching practice. The very thing I thought was holding me back from being a full-time artist was actually the place that I began my interest in mental health and resilience. It was difficult for me to process their stories of trauma and challenges, and I would go to the studio and work through those topics and emotions. Now that I’ve made a conscious decision to incorporate those themes in my work, finding ways to visually express that process is the major motivation of my practice. On a day to day basis, however, I look to fellow artists, past and present, famous or not, to keep me going. Whenever I’m experiencing doubt and self-loathing (that happens more often than I’d like to admit), I find a magazine article, interview, podcast, whatever- just to hear from others who are going through similar struggles.

Where do you hope to be 10 years from now and what would you like to say to yourself?
Trying to imagine 10 years from now was a difficult exercise for me. I think maybe I have this fear that if I imagine something too specific, it’s bound not to happen. A little bit of that is superstition, but I also know that I could not have predicted 10 years ago where I’d be now. After consideration, I came up with some things I really do hope for. I imagine I’d like to continue teaching in some capacity, but I hope I can have a better balance, having studio time and teaching less hours a day. I also want an art practice that sustains itself financially. I don’t have lofty goals of wealth, just that I can keep going and pay the bills. Artistically, I hope to experiment and expand on my ideas and concepts. By then, I want to have developed a body of work that allows me to explore themes in depth. I’d like to form and sustain even more connections with others. Ten years from now, I’d like to tell myself: remember where you started and how far you’ve come. Simply the fact that you’ve continued to make art is reason enough to feel accomplished. 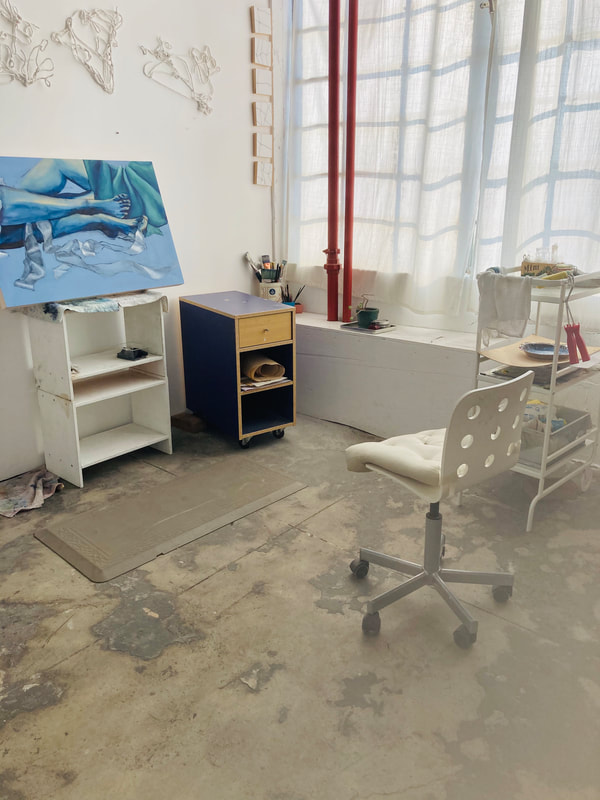